Books for Writers (4): The Uses of Enchantment, Bruno Bettelheim 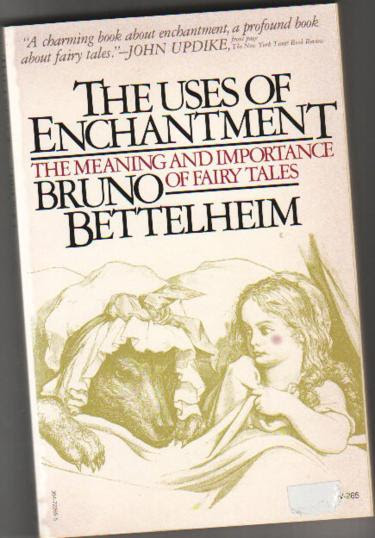 I adored the Disney adaptations of popular fairy tales as a kid--Sleeping Beauty, Snow White, Beauty and the Beast. I also love reading fairy tale adaptations, like last year's Ice by Sarah Beth Durst. But when I picked up a collection of Grimm Brothers' fairy tales recently, many of the stories left me cold. In their raw form, they seemed to lack the magic and romance that I loved in the adaptations. I was disappointed that I couldn't appreciate the original stories as so many do.

Oddly enough, I was still determined to do what I set out to do: write a fairy tale adaptation. I had found a tale that resonated with me, one that was highly unusual and very inspiring. But I wanted an understanding of what fairy tales are and what they provide their readers with before I got too far into my own project. I came across The Uses of Enchantment: The Meaning and Importance of Fairy Tales by Bruno Bettelheim in an interview with an author of a fairy tale adaptation (I believe the author was Malinda Lo of Ash fame). Written in 1975, The Uses of Enchantment brings a psychoanalytical approach to fairy tales. Bettelheim posits that fairy tales are critical to a child's development and symbolic of crucial life experiences.

Bettelheim, hailing from Vienna and born in 1903 , was greatly influenced by Freud's psychoanalytic theories. We touched on Freud's theories when I was doing my undergraduate psychology degree a few years ago, but he is very much out of vogue in that discipline. (I can't speak for the field of psychiatry, however. I imagine he'd still be popular with psychiatrists, as they seem to be much more case-study focused than psychologists.) It's worth brushing up on Freud's theories of the unconscious; the id, ego and superego; and psychosexual development if you intend to read this book. Perusing the Wikipedia entries is enough.

Bettelheim's use of Freud's theories to analyse fairy tales helped me understand the symbolism contained in them. As Freud turned to classical myths such as Oedipus Rex to illustrate the universality of human development, so Bettelheim uses Freud's theories to illustrate the universality of fairy tales. "Hansel and Gretel" becomes a tale describing the small child's fear of being devoured, or deserted for eating his or her parents out of house and home--a fear, Bettelheim believes, that every child experiences on an unconscious level.

Fairy tales are good for children, Bettelheim believes, as they allow them to indulge in hate and revenge fantasies. This is one reason why fairy tales are so violent. The other reason, which makes excellent sense to me, is that children have an innate sense of right and wrong: goodness is rewarded and evil is punished. You and I can appreciate mercy as we see the world in shades of grey rather than black and white; but Bettelheim is adamant that mercy makes no sense to a small child. The punishment should always fit the crime, which is why the witch who was going to eat Hansel and Gretel should be pushed into an oven, which is symbolic of her being eaten herself.

The Uses of Enchantment is an excellent book for those interested in the symbolic nature of fairy tales. A warning, however: For those with a deep fondness for these tales as they remind them of a more innocent time, a psychoanalytical understanding may ruin them. Wicked stepmothers and handsome princes will become objects of oedipal attachment and jealousy forevermore. You have been warned!
Posted by Rhiannon Hart at 8:23 PM

Email ThisBlogThis!Share to TwitterShare to FacebookShare to Pinterest
Labels: Bruno Bettelheim, The Uses of Enchantment