Review: The Forest of Hands and Teeth 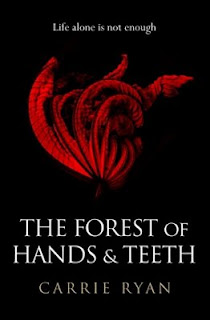 Mary has never known life outside the fences that protect her village from the Forest of Hands and Teeth. But ever since she was a child her mother has told her stories of the ocean, passed down by the women in her family since before the Return, when the Unconsecrated began to stalk the land. The Sisters, who rule the village with an iron fist, preach that there is nothing beyond the fence but an endless forest. But Mary is restless and yearns for more than the meagre options given to her, and she's sure that somewhere, beyond the fences, lies the ocean.

This book is very dark, and very readable. I devoured it on my flight back to Australia and it was the perfect travelling companion. Mary's voice is matter-of-fact and childlike, illustrating her naivety that has resulted from her life-long isolation in a tiny village. She knows no other life than one of obedience to the Sisters and the vague idea that one day soon she will marry. This is a sticking point for Mary: she's in love with one boy, but another plans to ask for her. And the one she's in love with is about to ask for her best friend, Cassie. Ouch. The love quartet, or square, if you like, is suitably painful and complicated. Ryan has captured the teenage reluctance to discuss anything to do with love.

It's a common theme of dystopian novels that post apocalypse (whether it be zombie, nuclear or otherwise), religious zealots seize power. In The Forest of Hands and Teeth it's the Sisters who fill this role, and Sister Tabitha is dangerous, creepy and seemingly omniscient to boot. With the Sisters on one side of the fence, and the Unconsecrated on the other, Ryan has created a bleak and unforgiving world.

I loved the number riddle--for me it was the most original part of the book, and crucial to the dramatic tension. I also like the fact that Ryan didn't feel the need to tell us exactly how old Mary is, or what she looks like. I had a picture in my head thanks to the US cover, but it was her character that made her come alive.

There are suitable amounts of carnage, but I can't get the same sense of being terrified from a horror book as I can from a horror movie. The tension just doesn't build without the music and cinematic image of a rotting zombie suddenly leaping out me from behind a door! But that's my fault, and not Ryan's.

Minor niggles: All the capitalisation; too much is distracting. Also, I love the name of the book, but would the villagers themselves have given such an artful, poetic name to a forest full of zombies? And again, it's capitalised every time.
Posted by Rhiannon Hart at 2:21 PM

Email ThisBlogThis!Share to TwitterShare to FacebookShare to Pinterest
Labels: dystopian, The Forest of Hands and Teeth