When a highly contagious virus erupts in Asia killing the rice crops and causing widespread famine in China, the rest of the world watches as the country descends into barbarism and cannibalism. Reminiscent of Australia's rabbit-proof fence, the Chinese in Hong Kong are barricaded into their country and left to die. While England and Europe tut and tell themselves that if only the "Asiatics" had come to them for help in the first place they wouldn't be in this mess, a strain of Chung-Li emerges that kills not only rice, but all grass: wheat, rye, oats. Everything. That means no bread, no cattle-fodder, no cattle. Just about all of Western farming, except for things like potatoes, is wiped out in one fell swoop. The Death of Grass follows two families' escape from London and northwards to Westmorland, where one man's brother owns a valley, a farming oasis that can be protected from the starving, panicked, rioting population. 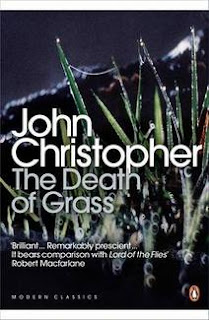 This novel is unusual for its genre in that at the novel's opening, everything's normal. In the Western world, at least. Written in third person that switches between omniscience and a close following of John, leader of the group travelling northwards, the reader gets wide-angle and close-up shots of the epidemic and subsequent social and political fall-out. Set in 1956 (also the year of its publication), the novel is a reflection of the times. Just about all of the male population can use a gun as they went through WWII. Also, the telling is rather male-centric. This is probably due partly to the author's bias, and partly the era. In 1955, feminism had had it's first wave decades earlier and wasn't due for it's second for several more years. When society collapses due to Chung-Li, decades of progressive thinking are undone and women and girls are again at the mercy of men who want to either rape them or rule them.

Looking past Christopher's assumptions about gender, this book is one of the best written of the challenge so far. A virus that kills grass isn't all that far-fetched, and the fact that it could (and has, but on a smaller scale) happen makes the The Death of Grass is a chilling and fascinating read.
Posted by Rhiannon Hart at 8:00 AM

Email ThisBlogThis!Share to TwitterShare to FacebookShare to Pinterest
Labels: The Death of Grass, The Dystopia Challenge