Sympathy for the Devil: Humbert vs. Lolita

Reading Lolita by Vladimir Nabokov (1955) has to be the only time I've considered a pedophile's actions and thought, "Hey, I'm okay with that!" In fact, I wasn't just okay with Humbert Humbert and his quest to seduce Lolita, I was gunning for him.

I know I'm not alone when I say this--others have confessed, with guilty, delighted smiles on their faces, that they too were in some measure on Humbert's "side".

Lionel Trilling, an American literary critic, puts it rather eloquently when he writes "we find ourselves the more shocked when we realize that, in the course of reading the novel, we have come virtually to condone the violation it presents [...] we have been seduced into conniving in the violation, because we have permitted our fantasies to accept what we know to be revolting." 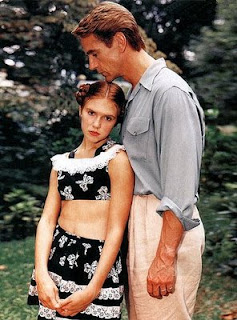 From the 1997 film adaptation of Lolita
The question is, how does Nabokov make us "condone the violation"?

After a Pooh-like ponder, I'm going to put it down to this:
This said, I don't think Lolita deserved what happened to her. Neither to I think Humbert was justified in his actions--in fact he is totally reprehensible. He's right to feel guilty when he realises he robbed Lo of her childhood. What I'm fascinated with is Nabokov's seemingly impossible feat of making rational, sympathetic, law-abiding citizens--even momentarily--"condone the violation".

I'm trying to remember other works of literature in which we end up sympathising with the devil, so to speak. Hannibal Lecter's rather honourable and gentlemanly as far as serial killers go. After all, he chops off his own hand rather than Clarice's when they are cuffed together, a moment I find to be supremely romantic for some reason. (I never read the second book but I'm assuming it happens there as well as in the movie.)

There must be more examples than this but I'm mental blanking right now. Basically, I'm in awe of any writer who can pull of the my-character-is-heinous-but-you'll-love-them-anyway trick.
Posted by Rhiannon Hart at 9:03 AM