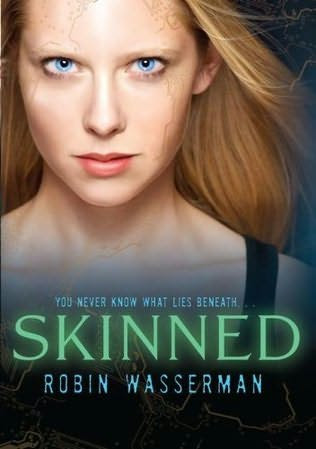 After an accident that leaves her body burned and broken, Lia Khan's brain is downloaded into a Skinner: an artificial robot body. As far as she can tell, she is Lia Khan. She feels like Lia Khan, though feeling doesn't "feel" like it used to. But she doesn't look like Lia Khan, or function like Lia Khan. She desperate to get her old life back, to feel normal again, but her friends and family are having trouble accepting her how she is. Is she really Lia Khan, or merely an imposter?

Books about the most popular, gorgeous, wealthy girl in school are, to me, as irritating as nails down the blackboard. Probably because this sort of girl was the antithesis of me in high school! I had a little groan to begin with, but Skinned is about as far from the poor little rich girl story as you can get. Rather, it's about the choices we make after a traumatic event: is it better to live in the past, trying to move backwards; or forget the past and look only to the future; and the consequences of these decisions.

As in Uglies, the world of Skinned is set sometime in the future after a chaotic, probably nuclear event. The privileged, like the Khans, live a cushy suburban lifestyle with all the energy and consumer goods they could wish for. The cities are for the unfortunates, the slum-dwellers, the losers, and their residents are grossly misunderstood by those who live a more fortunate existence. Lia remarks at one point that "everyone knows you can work yourself out of the cities", as if all it takes is a little elbow grease to overcome poverty. She, like her friends, is shallow and obnoxious. Nevertheless, as we meet her post-download during her horrifying rehabilitation, she inspires enormous sympathy and has major opportunity for growth.

After a handful of chapters delivered in Lia's deadpan style, we meet Auden, a boy so consistent with our own times that he could have been transplanted straight out of the nineties. He wears a watch and glasses (unheard of in this world, as watches are becoming rare nowadays) and voices all these "conspiracy theories", as Lia calls them, that to the reader are so obviously spot on. Auden is the opposite to what Lia was before the accident. He's also the one who has embraced all the technological advantages of this age the least. It's rather ironic, then, that he is only person at school who has anything to do with Lia now she's a Skinner. Apparently, robot fashion is cool, but not robots themselves.

Through Auden, but especially through Lia, Wasserman explores issues; there are issues upon issues in this book: date-rape, peer pressure, Brave New World-esque self medication, poverty, disability, racism, suicide, risk-taking, cutting, medical ethics and genethics.* And not just the obvious medical ethics of cyborgs and having a say in decisions about ones own body, but also experiments on minorities and poverty-stricken groups that mirror the unethical AIDS drug trials performed in Africa by multinationals, among others.

Skinned is inevitably compared to the much-loved The Adoration of Jenna Fox by Mary E. Pearson. I read Jenna Fox earlier in the year, before I was blogging, and enjoyed it very much. But while the themes of the two books are similar, there's so much more to get your teeth into reading Skinned. (And each chapter isn't begun with a badly written poem.) In my opinion, Skinned is a metaphor for depression that has resulted from a traumatic event, but presented in a highly palatable and sci-fied way. The things that made Lia happy before the accident don't anymore; her emotions and sensations are deadened; her relationships suffer. The best speculative fiction is that which wraps 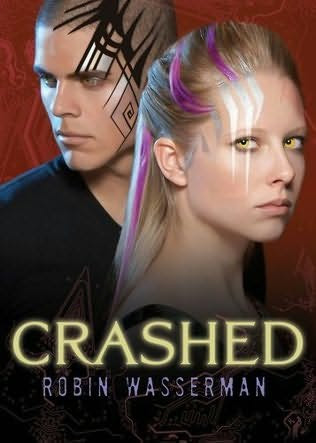 truths about own world up in fantastical elements, and Wasserman has done just this. She's clearly a seasoned writer.

Skinned is the first in a planned trilogy and there's plenty of territory left to explore. Book two, Crashed, is out in the US on September 8. Skinned has made a very satisfying end to my Dystopia Challenge.

~~
*I may have made this up but I think it's an accepted contraction of genetic ethics.
Posted by Rhiannon Hart at 7:19 PM

Email ThisBlogThis!Share to TwitterShare to FacebookShare to Pinterest
Labels: Skinned