Patrick Ness is the author of the Chaos Walking trilogy, which includes the award-winning The Knife of Never Letting Go (2008), The Ask and the Answer (2009) and Monsters of Men (2010). I've been blown away by what I've read so far in this series and I eagerly await the third and final installment.

Fantastic news for Aussies: Patrick Ness will tour Australia and New Zealand early next year. Between February 24 and March 20 he will be stopping at Perth, Melbourne, Hobart, Sydney, New Zealand and Brisbane.

1. How did you first get the idea for the Chaos Walking books?
I always say they started with a serious idea and a stupid idea. The serious idea was about information overload, that the world is already pretty noisy with mobile phones, the internet, networking sites, etc. The next logical thought was, what if you couldn't away at all? That's where Noise came from. And the stupid idea is that I don't like books about talking dogs because they never talk like an actual dog would talk. So I thought it'd be funny to write one the way I always thought my own dog growing up would talk. It was good fun. And from those two ideas, a story started to form.
2. Did you always intend for the Chaos Walking books to be aimed at a young adult audience, and what is appealing about writing for this demographic?
The story itself kind of told me it was for young adults rather than the other way around, which I think is probably how it should really go. I was as surprised as anyone. What's appealing is that teenagers aren't snobs! If you respect them and tell a good story, they'll follow you anywhere. But you do have to tell that good story, so you've got to be on the ball all the time. It's a great challenge, very liberating, too.
3. Who are some of your favourite young adult books and authors?
There are some excellent young adult writers around, aren't there? People like Meg Rosoff, Marcus Sedgwick, Terry Pratchett, Siobhan Dowd, Mal Peet, I could go on...

4. I'm intrigued by Noise and how it affects the men of New World. Do they feel disempowered by it? Would New Elizabeth be a safe and happy place if it wasn't for the Noise?
Well, I tried to show that there could be different reactions to Noise, with Prentisstown being the worst. But as they journey along, Todd and Viola see places like Farbranch where it's not so bad or Carbonell Downs where it's less good but plausible. And then there's Haven, where things are complicated. It's what you'd ask of any place, I think; safety and happiness are tenuous things that need to be worked for against our natural fears.
5. As I remember it, Mayor Prentiss came to New World as a settler. Were his intentions on setting out to wage war, or did he start out as a good man?
I suspect the answer's messier than just one or the other. People never get to power by a single action or intention; there are opportunities along the way that you can take or not take and those build on each other. In fact, it's the theme of The Ask and the Answer about how you can even take what seem to be a series of small right decisions and still end up possibly doing something terrible. I suppose it's about how many compromises you're willing to make before you lose your humanity. As for the Mayor, maybe he had a predisposition, but you still need the circumstances to help you along. I suppose the crux of it is that I don't think anyone is beyond redemption. You have to have hope for everyone. Now, whether they want to be redeemed is a whole other question...
6. Is Todd the rightful president of New World?
Ah, well, is anyone the "rightful" president of anywhere? It's that old axiom that wanting to be in power should automatically disqualify you from ever having it. Todd would probably be an excellent president of New World, but he'd never want to be it (which is probably what would make him an excellent president and so on around the circle...) 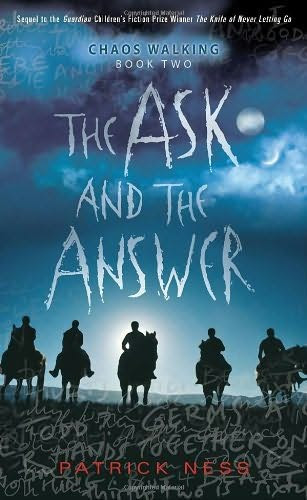 7. Your upcoming book tour includes stops in Australia. Have you been to Australia before, and do you have any favourite Australian authors?
My very favourite author of all time is Australian, Peter Carey, and I end up reviewing a lot of Australian fiction for UK newspapers because I've read so much of it, like Tim Winton and Murray Bail. I can even reference Patrick White with confidence! Peter Carey is fantastic, especially at implying a larger imagined universe than is just in the particular book. I love that. And I have been to Australia, way back in 1993 when I was a fresh-faced college lad. Can't wait to get back there.
8. You probably can't answer this, but I have to ask. Is Ben really dead? The pictures Todd sees in Davy Prentiss's Noise towards the end of The Ask and the Answer are ambiguous. I do hope he's alive!
Well, I'm not exactly known for my unwillingness to kill off nice characters, I'm afraid. I get asked this question over and over again about Manchee, too. I'm an evil, evil man and I'm sorry for that.
9. Is Monsters of Men complete? Can you tell me what we can expect in six words or less?
Monsters of Men is in its final stages, yes. Six words on what to expect from it, hmmmmm: War, surprises and a killer ending.
10. What can we expect from you in the future? More young adult books I hope!
I've got some ideas brewing on the young adult front, definitely. I'm as interested as anyone to see where they go. Stay tuned!

The Ask and the Answer has been shortlisted for the Booktrust Teenage Prize, which The Knife of Never Letting Go won last year. Congratulations, Patrick!
Posted by Rhiannon Hart at 6:38 AM

Email ThisBlogThis!Share to TwitterShare to FacebookShare to Pinterest
Labels: Monsters of Men, Patrick Ness, The Ask and the Answer, The Knife of Never Letting Go