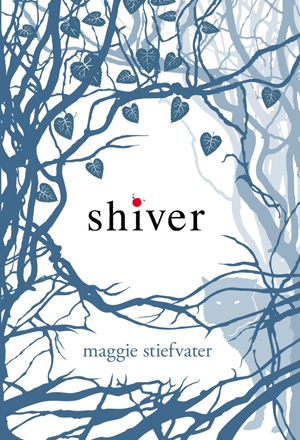 When a boy at school is killed by wolves, Grace finds "her" wolf on her doorstep, shot, bloodied, and in human form. He is the wolf that saved her from the wolf pack in a distant winter of her childhood. His name is Sam, and he has been watching her. But winter is coming on, and it is likely the last year that Sam is able to take human form.

The language Maggie Stiefvater uses to describe cold, wolfy winters is beautiful. If Shiver was an exquisite painting or delicate piece of bead work that you could gaze on for a few minutes, it would be perfect. As a book of nearly 400 pages, it falls short of being satisfying.

While beautiful, there is an emptiness to the language, and this emptiness is carried over to the characters. Grace and Sam's first meeting goes like this:

And then from Sam's perspective:

I saw it happen. I didn't stop it ... I saw muzzles smeared with red. Still, I didn't stop it ... What was wrong with her? If she was alive, why wasn't she struggling? ... I thought she was the most beautiful girl I'd ever seen, a tiny, bloody angel in the snow, and they were going to destroy her. I saw it. I saw her, in a way I'd never seen anything before. And I stopped it. (page 3-4)

Really, why wasn't she struggling? It's never explained. There has been criticism that Grace is an enfeebled heroine or that she's dangerously stupid. I didn't see evidence for either of these things, but I didn't detect much depth to her character, either. Take away her longing for her wolf, and she is nothing. Oh, she cooks. Conversely, take away Sam's longing for Grace and he is nothing. (A habit of composing corny lyrics is not a personality trait.) This works somewhat for Sam as he has no future as a human. Grace, however, does, but there's no sense of the person she wants to be apart from The Girl With Sam. And it is this that makes large parts of Shiver rather dull.

Shiver is a beautiful painting made prose, but without the depth of characters that makes for a truly satisfying and engaging read.
Posted by Rhiannon Hart at 11:21 AM