I just happened to be browsing Patrick Ness's blog, as I am wont to do, and I discovered that the UK cover of the third and final book in the Chaos Walking trilogy has been released. Like, weeks ago. WTF universe, why didn't you tell me?

How epic was the end of book two? How much were you yelling "Don't do it Todd! TODD HEWITT! NO!!"

Without further ado, here it is. I am pining myself out of existence waiting for this book. (May UK/Australia, September US.)

“War,” says the Mayor.“At last.” Three armies have marched on New Prentisstown, each one intent on destroying the others. And Todd and Viola are caught in the middle of it all. As the battles commence, can they hope to stop all-out war? Can there ever be peace when they’re so hopelessly outnumbered? And if, as they have been told, “War makes monsters of men”, what terrible choices await them? And what of the third voice that watches them, one bent on revenge... The electrifying finale to the multi-award-winning Chaos Walking trilogy, Monsters of Men is a heart-stopping novel about power, survival, and the devastating reality of war.

Released this week was the cover of Spells (May 2010), the sequel to Wings. I really liked Wings and dear Laurel, and I'm curious to see who she'll end up with as it's really not that obvious. Especially not to her. So she's kissing both David and Tamani, trying them on for size, conveniently forgetting about the other when she's with one of them ... Lucky girl! 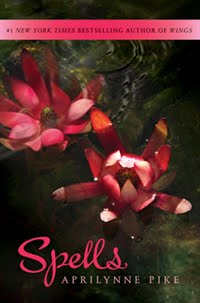 Six months have passed since Laurel saved the gateway to the faerie realm of Avalon. Now she must spend her summer there, honing her skills as a Fall faerie. But her human family and friends are still in mortal danger--and the gateway to Avalon is more compromised than ever.

When it comes time to protect those she loves, will she depend on David, her human boyfriend, for help? Or will she turn to Tamani, the electrifying faerie with whom her connection is undeniable?

The cover art for Return to Labyrinth Volume 4 was released the other day as well. It's breath-takingly stunning. Released on August 3.

And now we gaze at the prettiness.

L-R: Toby, Moppet, Sarah, Jareth. Gods know why Moppet's in the gown. She's in love with Candlewic, who's totally evil and an ass to boot. And ew, surely she can't be marrying Toby. If you've read v3 you'll know why that would be ew!
Posted by Rhiannon Hart at 6:21 PM

Email ThisBlogThis!Share to TwitterShare to FacebookShare to Pinterest
Labels: Waitng on Wednesday