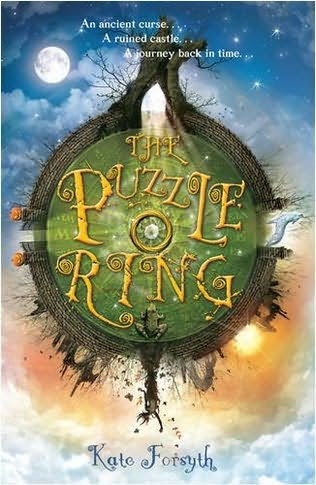 Hannah couldn't be more different from her rational, scientific-minded mother: she believes in magic. When they travel to the ancestral home in Scotland, Hannah discovers her family is cursed. The last person to attempt to break the curse was her father, who disappeared thirteen years earlier shortly after she was born. Hannah resolves to pick up where her father left off, reunite the four parts of the puzzle ring, break the curse and put the rightful heir to the fairy court back on the throne.

The Puzzle Ring is one of the coziest books I've read in a long time. The remote Scottish setting, village life and the fairy lore combined to make it a very sweet and exciting adventure. Scottish folklore is so rich with tales of magic, fairies and travel into other realms and times. I think we all hope that such stories are true. Reading about a character who does discover they are true, and that she's the heir to a title as well as a hundreds-year-old curse, is such a delight. Hannah is clever and adventuresome, and at thirteen possesses childlike curiosity and openness, as well as a burgeoning sense of romance and responsibility.

Kate Forsyth has meticulously researched not only magic and folklore, but also Scottish history. Timeslip novels require authenticity and plenty of detail to be successful, and The Puzzle Ring is the most satisfying of its kind that I have read since Playing Beatie Bow by Ruth Park--another Australian gem. Did I mention that Kate Forsyth is Australian? I'm so proud!

This is the sort of book to curl up with a cup of tea and a supply of homemade baked goodies. Traditional English teas are served up every few chapters and the descriptions of the food will make your mouth water. Especially the marmalade cake. Forsyth provides a recipe for it in the appendix and I'll certainly be trying it. She also provides a discussion of the physics of time travel and several pages on Mary Queen of Scots.

The Puzzle Ring was shortlisted for a 2009 Aurealis award.
Posted by Rhiannon Hart at 6:41 AM