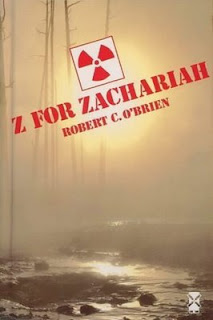 The thing I hate about writing reviews is not being able to discuss what happens in the end!

Okay, that doesn't always bother me, but in the case of Z for Zachariah it does. Because all I want to do right now is sit down with someone and say, "Oh my god, how about when blah took the blah blah," and for them to say, "I KNOW! What about when blah did blah--I soooo didn't see that coming."

But I don't want to ruin this book for you so I'll try and restrain myself.

Z for Zachariah (1975) by Robert C. O'Brien reads like a Judy Blume book, post-nuclear apocalypse. He also wrote Mrs Frisby and the Rats of Nimh, which sounds pretty naff but the bf tells me it's brilliant. Way smart rats, apparently.

Ann Burden is fifteen and the last person left alive on Earth--or so she thinks. She's sheltered from fallout in a valley somewhere on the east coast of America. (My US geography is pretty shaky but a local could probably work out exactly where. Boston was mentioned.) One day a man in a plastic suit comes to the valley. He's in his early thirties and seems normal enough from a distance. When he keels over from radiation sickness (the stupid man goes swimming in a stream before checking it with his Geiger counter) Ann nurses him back to health. Feverish for days, the man--Mr Loomis as Ann so old-fashionedly calls him--raves about someone called Edward. It seems Mr Loomis and Edward made the suit, it's the only one in the world, they both wanted it and now Edward is dead. Ann checks the suit and, sure enough, there are three patched-over bullet holes in the chest.

On page 100-101 of my 192-page edition, Ann realises that Mr Loomis has killed Edward, but she does "not know just how bad it is." She writes in her diary, "In a way it depends on what Edward was like." She reasons that if one was acting unreasonably, or dangerously, then the other might be justified in killing him--the suit, after all, offers the only protection available when moving around the wastelands.

Now, if I was an English teacher, the essay question I would pose is: "Do you agree with Ann? Discuss."

In fact, if you want to answer this question, whether you've read the book or not, please feel free below! If you have read the book try not to let later events influence your answer (or give anything away).

After that, things turn deliciously dark.

I read this book in a day and then watched The China Syndrome, so I'm all nucleared out for a wee while! But go to your library and get Z for Zachariah. It's a must for dystopian fans, especially those who like John Wyndham and Isobelle Carmody.

I'm now turning (again) to The Carbon Diaries 2015, another dystopian. I say again cos I had to review some other books and then mislaid it. But it's feeling rather bland and frivolous after Z for Zachariah. Shame.

Last of all, a shout-out to my three followers, Steph, Aimee and Neve. Hello followers! *waves* I can't tell you how happy it makes me to see you there, and know that I'm no longer talking into empty cyberspace :)
Posted by Rhiannon Hart at 10:36 PM