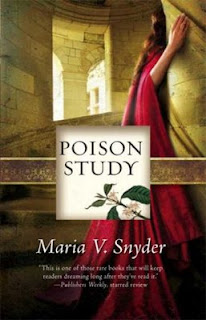 On the morning of her execution, Yelena is offered the job as food-taster to the Commander of Ixia. Assassination attempts not being uncommon, Yelena faces the possibility that her reprieve will be short-lived and end with a death by poison that far more painful than one administered by the hang-man's noose. She is trained by the Second-in-Command, Valek, a steely, proficient fighter who poisons her with Butterfly's Dust. She must stay close to him on order to receive her daily dose of antidote. Yelena dreams of escape and freedom from Reyad's ghost, the man she killed for torturing and raping her, but things aren't destined to be simple for her.

Maria V. Snyder has built an excellent world. Too often fantasy writers bewilder the reader with a slew of complicated names and social structures in the very first chapter (e.g. Anne Bishop, Daughter of the Blood), something I can't stand. But Snyder takes the softly, softly approach, coaxing her world into life alongside the characters, the grit and the dramatic tension. And what a world it is. Set post-revolution, Ixia has become a communist-like nation: everyone is assigned a job and a uniform (but not a vote), provinces are now numbered and called Military Districts (MD-1, MD-2 and so on) and no-one is allowed to travel without the right papers. Sounds pretty strict, right? And we all know that communism doesn't work, right? But in Snyder's Ixia, it's all going pretty smoothly.

Oh, apart from all the poisons. As well as the world itself, Yelena learning about poisons from the simmering Valek is pretty entertaining. There's no henbane and strychnine here; Snyder has created a cornucopia of amusing ways to shuffle off ones mortal coil, the most vicious being Have a Drink My Love, so called as it is favoured by disgruntled wives.

This is sold as adult fiction rather than YA, but as the writing style is (blessedly) uncomplicated and the protagonist is nineteen it really fits in both age groups. I do have one teensy grumble: as it is primarily for adults, and Snyder did such a good job at building up the sexual tension between Yelena and Valek, and because Valek is such a physical, earthly character, when the inevitable love scene came I was expecting a bit of, well, physicality. I don't expect porn. Just a hint of something that I can get my teeth into. What I got was two metaphorical paragraphs about air and magic and melding of minds. Radical politics and puritan sex. Pfft.

That said, I still highly recommend Poison Study. It's one of the most cohesive and satisfying works of fantasy that I've read in a long time. I'll be picking Magic Study up from the library very soon.

Editorial grumble: paragraphs after section breaks were indented rather than full-out (aligned to the left margin). This is incorrect but as it was done consistently, and my copy is a first edition, I won't hold it against the editor too much.
Posted by Rhiannon Hart at 8:20 AM