Over dinner one night I was explaining how much I love Obernewtyn by Isobelle Carmody to my father and boyfriend. After a minute or two both chimed in to ask if I had read The Chrysalids by John Wyndham. I hadn't even heard of it, so soon after I picked up a copy from the library. I'm very interested in literary pedigrees; as in, which book inspired another. 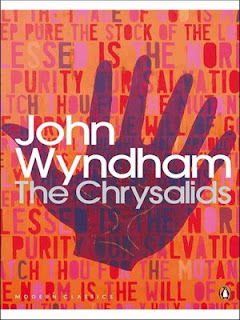 Published in 1955, The Chrysalids is set a few thousand years in the future on the remote island of Labrador, post-nuclear apocalypse. Because of nuclear fall-out genetic mutations are common, and in the fundamentalist Christian society that has developed since the Tribulation, invariance is close to Godliness and mutations are punished by death or exile.

While this isn't strictly YA, the protagonists are first children then teenagers and the style is highly accessible. David is the son of a religious patriarch, and despite his upbringing he befriends Sophie, a girl with six toes on each foot. If this blasphemy is discovered she will be exiled to the Badlands, a place on the fringes of society where mutants are cast after sterilisation. David and a number of his contemporaries are hiding their own mutations, which are telepathic abilities. Naturally, it becomes impossible for these teenagers to exist in such a society.

I enjoyed this novel more than Day of The Triffids (also written by Wyndham) as the characters were far more believable. As I remarked in my review, Wyndham's characters can wax didactic, something that is both irritating and unnatural. People just don't (all) speak that way. In The Chrysalids, the New Sealand (New Zealand*) woman indulges in one of these speeches, but it is in character, and one of the other characters actually remarks on her annoying rhetorical style.

But what a world that Wyndham has created! In an age that was terrified of the nuclear holocaust this book must have created quite a stir. Born in the eighties I was blissfully unaware of the Cold War, but my father and partner (who is ten years older than me) have told me their childhood fears of "the bomb". Carmody, born in 1958 and who released Obernewtyn in 1987, must have grown up with similar fears, and undoubtedly read The Chrysalids. I'll be reviewing Obernewtyn shortly and examining the parallels between the two novels further.

I enjoy Wyndham's supernatural tendencies and his imagination. His dystopic versions of the future can't necessarily come into being, but his warnings about tolerance and eugenics are extremely relevant for this world.

Side note: Don't you just love these Penguin Modern Classic covers? I can't decide which I love more, this one, or the ones that grace The Death of Grass and Day of the Triffids.

*My partner is a Kiwi and he enjoyed crowing to me that "the New Zealanders save the day!" It's probably mandatory reading over the ditch.
Posted by Rhiannon Hart at 9:12 AM

Email ThisBlogThis!Share to TwitterShare to FacebookShare to Pinterest
Labels: The Chrysalids