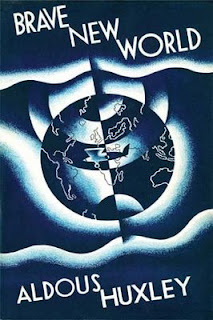 In the year of Our Ford 632 (2540 A.D), unhappiness has been abolished through reproductive technology, conditioning and drugs, resulting in a "utopian" society that favours stability above all else.

But viewed from the outside (that is, how we the reader sees it), the The World State is a horrifying place to live. The reproductive technology enables manipulation of foetuses to create a caste system: Alphas and Betas, who are smart, physically large and attractive, down to Gammas and Epsilons, who are small, ugly and moronic. Each caste is conditioned to be happy with their lot in life. Outside working ours the people are encouraged to be "as a babe in a bottle", i.e. indulge in gratification and pleasure-seeking behaviour, including rampant consumerism and promiscuity.

There are areas of the world deemed too poverty-stricken or savage to "stabilise", and a Native American reservation is one of these. From here comes the Savage, a Caucasian man born and raised on the reservation. It is from the Savage that we hear Miranda's words from Shakespeare's The Tempest, which gives this novel it's title:

How many goodly creatures are there here! How beauteous mankind is! O brave new world! That has such people in't!

The Savage is initially pleased by this society, so clean and wondrous compared to his own upbringing, but as he learns more his wonder turns to disgust.

Brave New World can be viewed as both anti-capitalist and anti-socialist. It rejects the loss of identity through mass-production and social interventionalism. Characters are given names that are conjunctions of famous persons at the time of writing, including socialist philosophers and leaders; industrial engineers and American presidents. Our Ford is Henry Ford, and his principles of unification through mass production have replaced religion.

Brave New World is so very unlike any other book I have ever read. Huxley's style and voice are unique. Such wit! Such invention! I was expecting a sort of Nineteen Eighty-Four, but where that book was dismal and horrifying, this one is funny and horrifying. Not only that, but its predictions about the opiates of the masses are spot-on. Society is over-sexed and over-spending, and always on the lookout for a quick-fix. (What is missing, however, is the cult of celebrity, though perhaps the Savage comes to represent this.) I have heard this book described as anti-Utopian, and perhaps it is. It could be that whenever humankind strives for social perfection things will go awry. Certainly a whole branch of literature is devoted to just this: dystopianism.

Published in 1932, the themes in Brave New World are still so relevant today, making it a true classic. Probably one of the best and most important books I have ever read, and so far my favourite of the dystopia challenge. I recommend it to everyone.
Posted by Rhiannon Hart at 10:11 AM