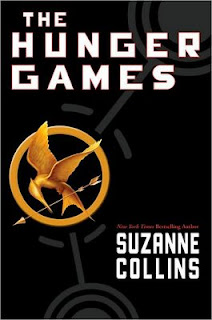 As you read this I will be trotting around our nation's capital, Canberra, a.k.a. The 'Bra. It's the home of our illustrious politicians, the only land-locked state or territory in Australia, and the most boring place to travel to. I'm going for work.

Yesterday in class I gave a presentation on The Hunger Games. Part of our mark consists of an oral presentation but I would have been happy either way to stand up and blather about this fabulous book for ten minutes.

What shocked me was that none of them had read it, and I believe no one had even heard of it! Including the teacher. And the name of the subject? Writing for Young Adults. Gasp! To be fair most of them aren't fans of paranormal, fantasy and dystopian (*sob*), but they should have at least heard of it. I had to set them straight.

This is what I told them.

"The Hunger Games is by Suzanne Collins, author of a series of middle-grade fantasy books. This is her first YA novel, and the first in a trilogy. I did not know it was a trilogy when I first picked it up, and subsequently when I got to the last page and saw End of Book One I had a hissy-fit and hurled the damned thing across the room. You have been warned.

"Sometime in the not-too-distant future, North America has become Panem, ruled by a totalitarian government who have set up the Hunger Games in order to show everyone just who's boss. The country is split into twelve military districts, 1 being the poorest and 12 being the richest. Every year by ballot, two names are drawn from a barrel in each district, one girl and one boy between the ages of 12 and 18. These children must then compete in the Hunger Games, a televised fight to the death, where there is only one winner.

"The story follows Katniss, a teenaged girl who nominates herself for the Hunger Games after her twelve-year-old sisters name is drawn. The first half of the book is Katniss's preparations for the games, and to me this part contained some of the most harrowing moments. I became so angry at a government who could treat its own people in such a way. It was the social structure and Katniss's character that I found most interesting. The fighting itself is gripping and Katniss is deliciously clever. To make things palatable, Collins eases the reader in with a few anonymous deaths. Later, she casts the other competitors as villains, allowing the reader to feel glad for their deaths rather than sorrowed.

While clever with a bow and arrow, Katniss is profoundly stupid when it comes to boys. I found the love triangle to be less than satisfactory. But then again, I am eagerly awaiting Catching Fire, out this September, so it must have done something for me..."

During question time, one of my classmates asked me how America became Panem, and I had to tell him I didn't know. I don't believe Collins goes into details. Another girl asked me, when I mentioned The Hunger Games was being made into a movie, if I thought there was a spate of YA movies coming out--and I had to say yes. Thanks to "The Big T", we're being graced with The Hunger Games, Tomorrow, When the War Began, and If I Stay. And probably more that I'm forgetting. Not to mention the TV series The Vampire Diaries and Gossip Girl. And I bet you a twenty that Evernight is gonna appear on our screens at some point.

So I know it's difficult to add anything new to a review of The Hunger Games. It's probably the last year's most blogged about book, at least in my circles. But I hope you enjoyed.
Posted by Rhiannon Hart at 6:55 PM

Email ThisBlogThis!Share to TwitterShare to FacebookShare to Pinterest
Labels: The Hunger Games