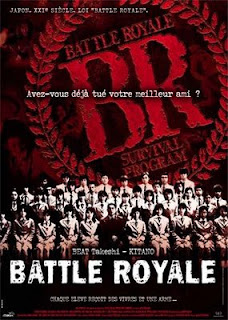 This movie is a load of fun! I started out by reading the book but was dizzy by the fourth page: all forty or so students are introduced, by name and defining characteristics. I don't cope well with a lot of names and things straight of the bat. Now that I've got everyone straight in my head I might give it another go.

For those of you who haven't seen it, Battle Royale is a lot like The Hunger Games. Like, a lot. The government's gone a bit mad over young people and forces them into an arena, gives them weapons and orders them to fight to the death. Last one standing wins, and gets to keep their life.

There's heaps of blood and guts and swishing noises when someone swipes a blade through the air. Plenty of tears and promises of being BFFs, about three seconds before the bullets start flying. Old rivalries and broken hearts come to the fore. (And aren't there times when you wish it could be you, the class bitch, a stun-gun and a hand axe?) Plus a touching romance. And did I mention blood? Heaps of blood. Gushing, spraying fountains of it--in that humorous "It's just a flesh wound!" Monty Python sort of way. Even though it has a R18+ rating, squeamish me didn't find much to get me peering between my fingers.

There's a double-cross towards the end. I think. The screen went black and there were gunshots, and Keiko may or may not exist. I'm not entirely sure. Which is quite frustrating because the movie was so easy to follow right up until then and now I'm left with a big "huh?" Oh, and the prologue? The girl with the braces? She never appears again. Not really sure what that was about.

So apart from the beginning and the end (which some people think are integral parts of a dramatic structure), Battle Royale is one film you should be asking your local DVD rental shop for, if only to do a compare/contrast with The Hunger Games. And to wonder what the movie adaptation is going to be like. And how they're going to swing a rating low enough for actual teenagers to go see it.
Posted by Rhiannon Hart at 9:05 AM