Hurry, we can CASH IN!

I thought Pride & Prejudice and Zombies was a pretty funny idea. I also thought Abe Lincoln: Vampire Hunter was funny too. Why not have a sequel? I mean, this Abe Lincoln one's at least going to require some original material, so Seth Grahame-Smith's gonna have to really work for his buck this time. Well, good on him for getting a second book option. But what did I see in a bookshop the other day? Sense & Sensibility and Seamonsters. *Groan* Can you say milking it? Captain Wentworth isn't even at sea in S&S, he's returned. No one's at bloody sea. Where are they going to put the sea monsters?

And what do I see on Bookshelves of Doom today? A link to this post about the Beatles being zombified. The title: Paul is Undead: The British Zombie Invasion. *double groan* That's a pun on the "Paul is Dead" you hear when you play Sergeant Peppers backwards or something.

But wait, THERE'S MORE! Queen Victoria: Demon Hunter and I Am Scrooge: A Zombie Story for Christmas. All out this autumn. Doesn't it give you a warm, fuzzy feeling that some bright spark in a publishing house somewhere is taking someone's clever idea and just driving it into the ground in order to squeeze every last freaking drop of cash that they can get out of this cow before anyone can say "exploit"? 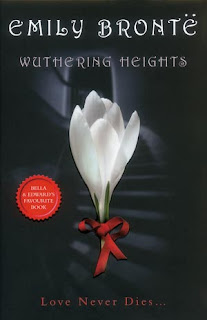 And now THIS. A few months ago I read somewhere that French Twihards were going nuts for copies of Wuthering Heights by Emily Bronte because Bella likes it or something. I don't know, I only read Twilight and that was enough for me. Now look what's appeared at lightening publishing speed. For those of you who can't read it, the little red starburst says "Bella and Edward's Favourite Book". Does everything that has anything to do with this insidious series be Twilightified? I'm sick of black, red and white covers! I'm sick of all this shameless cashing in! Not only is it tasteless but it's disrespectful to the authors who came up with the ideas and writing in the first place, and I'm including Seth Grahame-Smith, Stephenie Meyer and especially Emily Bronte in that statement. Because you can bet that it's not the writers sitting around wondering how they can cash in these books from every possible angle.

(I got this cover from Bloody Bookaholic who got it from A Flight of Minds. Check out their flabbergasted posts and many flabbergasted comments.)
Posted by Rhiannon Hart at 6:34 PM