Three months, leaden clouds, dark nights, and a whole reading pile full of persecution, despair and heroics. This was the Dystopia Challenge.

I've always had a thing for speculative stuff. I grew up in houses with my dad's Asimov and Niven, my mum's Le Guin and Cooper. Bedtime stories were The Hobbit and the Narnia books. I had a girlish crush on Tom Baker's Doctor Who, who was my number one Doctor until Christopher Eccleston blew him outta the water a short time ago. I've never been much for the "hard", outer space sci-fi. While I like my fantasy to be set far, far away in a distant, non-existent universe, I prefer my sci-fi ... with a little milk. I think that's why I like dystopian stuff so much: it's often science based, but it's set in this world, with a twist.

I did a bit of digging around to discover what "dystopian" actually meant. It's the opposite of a utopia. Utopia is the title of Sir Thomas More's sixteenth-century treatise about a republican paradise. Humans have worked together to create stable peace and happiness, abolish poverty and persecution. But the problem is we're a fickle, head-strong species, all with opinions of our own about how to attain paradise. It works in More's book. It doesn't work in real life.

Dystopian books started to emerge after the industrial revolution really got going in the nineteenth century. There was organisation and growth, and great power to wield. Rulers weren't just kings anymore, they were governments, and they had a vision for the future. H.G. Wells wrote The Time Machine, which has been pegged as the the first dystopian novel, in the late nineteenth century. The genre really exploded in the west with the rise of fascism in the early twentieth century. If you're looking for head-strong, you can't much go past Stalin and Hitler, two men who had absolute confidence in what they were doing: they were making "paradise".

The fundamental lesson to take away from dystopian literature is that humans will always fail when they strive for perfection. (Which seems like a damned good reason for me not to do the dishes today. I might turn into Hitler.) One person's perfection is another person's hell.

My original list of titles to read (bold=actually read)

Some of the ones I didn't get to I started but found unsuitable for young adults (and my own tastes right now) like Oryx and Crake and Children of Men, or they got bumped as I discovered more YA titles as I went.

This was the final list (including a couple of films):

Life As We Knew It, The Knife of Never Letting Go, Uglies and Skinned made it in because of recommendations by other bloggers, and you're right! They are fantastic books.

I lumped dystopian and apocalyptic books together under the banner "dystopian", but they can be rather distinct sorts of books. An apocalypse can be man-made (ie. nuclear, climate change) or natural (ie. massive asteroid hitting the moon). There's a lot of death in these sorts of books, often whole populations. My favourites of the apocalyptic genre were Life As We Knew It, Z for Zachariah and Obernewtyn.

On the other hand, in a dystopia, the "disaster" is purely human-made, and can be nuclear, totalitarian, biological, ethical and so on. The best of these were Brave New World, The Knife of Never Letting Go and Tomorrow, When the War Began. Oh, and The Hunger Games and Nineteen Eighty-four and ... so on and so on!

I loved just about everything I read in this genre. The Death of Grass blew me away despite its misogyny. The Day of the Triffids was totally creepy despite its bad dialogue. I was let down somewhat by Uglies, but I liked the characters and I'm hoping things pick up in Pretties.

Because I'm a biology nut from way back--and us biologists do love our classification schemes--here's another way you can sort dystopian books: by the narrative. There are three major ways these sorts of books can end. The hero escapes; the hero overthrows society; the hero dies. I notice that contemporary YA fiction--especially series--is mainly concerned with overthrowing narratives. In fact, every contemporary YA book on my read list is part of an overthrowing series, except Unwind. Everything's a series these days! Not one YA book is about a hero who dies. I was talking about The Hunger Games with my dad the other day (he's a high school teacher now so I've been throwing YA fiction at him at a rate of knots) and he said he would have liked it better if Katniss and Peeta had eaten the berries and died. I pointed out that you can hardly go around glamorising suicide in YA fiction. Whereas Brave New World, which is for an adult audience, is topped off nicely by someone taking their own life. (I do recommend this book to older teens. Huxley does this sort of book so-oo-oo much better that Scott Westerfeld's Uglies.)

I'm going to leave you with a little tale my friend Ben told me the other day. He had a real industrial dystopian moment that he knew I'd appreciate, and a dystopian-esque song recommendation: 'Machine Gun' by Portishead. 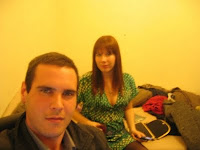 Me 'n Ben, posing for our forthcoming dystopian album. Sorry girls, he goes the other way! I show you this as there has been some speculation that the only dress I own is red tartan. See? I have at least one other dress!

I had an eerie moment last night walking home after dark. I rounded the corner of my street as 'Machine Gun' was playing on my iPod. I saw the commission flats, the full moon hanging low in the sky, shrouded in clouds, looking very moody, and the church ... it was like the universe was conspiring to create that moment.

This is a very creepy song. Happy Dystopia Challenge to me!

(YouTube wouldn't let me embed any version of this song apart from a live version. The quality's not as good, so I recommend you click over and watch one of the studio recordings like this one. The synthy bit at the end is tres cool!)

Posted by Rhiannon Hart at 9:43 AM

Email ThisBlogThis!Share to TwitterShare to FacebookShare to Pinterest
Labels: The Dystopia Challenge